Fischer Connectors was at Xponential with an ultra-miniature connector called the MiniMax 06 (top image), which can include up to 12 power and signal contacts in a footprint of 10 mm — earlier models had a 12-mm diameter. The new format corresponds to a density factor of 0.83, said to be unique for a connector with standard 0.5-mm contacts. The new connector can host two signal and two high-power 1.3-mm contacts for applications needing 10 A or more. Previous models had a 5-A current rating. The connectors have been tested for high-speed protocols such as HDMI and data transfer up to 10 Gb/sec.

Among the drones now using the Fischer connector system are those from Rapid Composites. The MiniMax connector was visible at the top of the drone at the Fischer booth, there for downloading data and recharging the batteries for the drone’s electric motors. 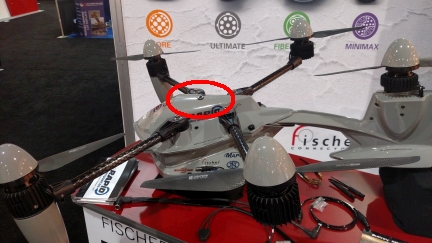