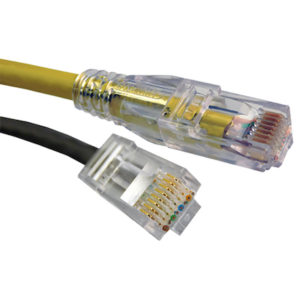 Stewart’s Qwik RJ45modular plugs are designed to be terminated to industry standard Cat5E and Cat6 cables, while reducing assembly time and improving termination quality in the field. Unlike the standard RJ45, the Qwik RJ45 allows cable conductors to be inserted into the connector before being trimmed to length. Stewart Connector’s 2940263-02 termination tool trims the cable conductors to proper length while terminating the plug contacts. Qwik RJ45modular plugs and strain reliefs boots can be purchased as a kit or separately in pre-packaged quantities of 50 or 100.

Applications for this connector include data, telecommunication, and industrial equipment connection. Qwik RJ45 terminations can be completed on location in the field or in the factory environment. The Qwik RJ45 offers the installer an efficient method to build custom length patch cords on demand.